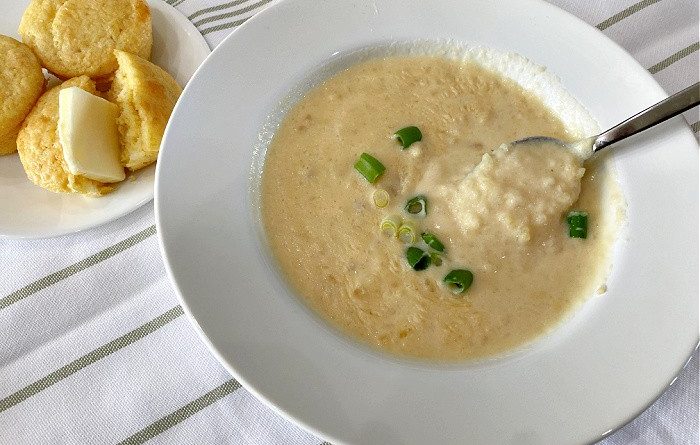 I love trying new recipes, and this 4-ingredient potato soup recipe is no exception. Janet, a friend and follower of my blog, sent me this inexpensive soup to make. I jumped on, literally. I love recipes that people can afford and are easy to make and then serve to their families. Thank you, Janet!!

I used to grow Yukon potatoes, but as some of you know, we are in the middle of building a home. The garden has to take a step back this year, which is extremely hard for me, but the end result will be fantastic.

My mother and grandmother always told me if you grow potatoes you will never starve. I have grown potatoes my whole life, and love to have the grandkids dig for them. It brings me such joy.

Kitchen Items You May Need:

Gather your ingredients so you’re ready to make the recipe. There’s nothing quite as easy as a 4-ingredient recipe, particularly if you’re on a budget and have limited time.

Peel the potatoes and cut them into bite-size pieces. Mark helped me peel the spuds, my hands don’t work as well as they used to.

Grab a large pan and place the cut potato chunks in it. Barely cover the potatoes with some water.

Add the butter, chicken bouillon, and garlic salt. Please note, at this point, you can pressure cook the potatoes with one cup of water (depending on your pressure cooker). I pressure cooked them on high for 6 minutes, and then did a quick release. Then continue on with the recipe. I love the way a pressure cooker saves time and makes meal prep so much easier.

Add the canned milk, and stir.

Step Six: Bring to a Boil

Bring to a boil, cover, and turn the heat to medium. Make sure you stir enough that the mixture doesn’t get stuck on the bottom of the pan.

Continually watch for the potatoes to be tender. Replace the cover after stirring them. When done, mash a few of the potatoes to thicken the soup. I mashed them enough that there really weren’t many chunks left. 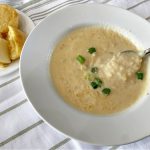 How do I store the cooked potato soup?

I store my leftover soup in an airtight Tupperware-type container in the refrigerator for up 2-3 days. This recipe made enough that we had some for lunch the next day.

Can I freeze this soup after making it?

I wouldn’t recommend it. After you freeze the soup it may become dry and grainy. As I’ve often said, give it a try and see how it works for you. You can always add a little water, heat it up while stirring, and even use your masher to minimize any chunks.

Do Russet potatoes work in this soup recipe?

Yes, Russet potatoes would work great. They tend to soak up the liquid, so your soup may be even thicker, which is awesome! It’s suggested to peel Russet potatoes when making a soup with them.

Do I have to peel the potatoes for the soup?

I did peel the potatoes, or I should say Mark peeled them for me. I wanted to make the soup as close to Janet’s recipe as possible. But, next time I may not peel them just to see how the flavor and texture turn out. I may peel them again in most cases since it worked out so well.

I make several cream soups where I don’t peel the potatoes. If you decide to use Russet potatoes, I would peel them for sure.

Can I add some cheese to this recipe?

I love adding some shredded cheese to a warm creamy soup. Just add a cup or so of your favorite shredded cheese to the soup a few minutes before serving to let it melt just a little. You can try a number of different varieties of cheese based on what your family likes.

Can I sprinkle cooked bacon on the top with some cheese?

My son-in-law added cooked chopped bacon and cheese on top of his, and he loved it! He ended up having two servings he like it so much.

Can I add a few other vegetables to this potato soup?

Yes, you can. I make a creamy soup and add some onions and broccoli to it. They would work in this recipe as well.

Can I use milk or cream instead of evaporated milk?

Yes, you can! It’s really nice to have a few cans of evaporated milk in the pantry to make soups. I believe my mother used it instead of having to go to the store to purchase the cream. Whole milk, half & half, or cream would work great because they are richer in flavor and texture compared to 1% or 2% milk.

What can I add to this soup to change it up?

My family loves this soup, the sky is the limit when making changes to this simple recipe. It’s so creamy, with tender pieces of cooked potatoes. The potato masher makes all the difference. I’ve listed below some ingredients I suggest you consider:

Most recipes will tell you whether or not to use a natural release or the quick release on your Instant Pot. However, if it doesn’t, here is how you will know:

Natural Release: This type of release is for tougher cuts of meat, recipes with high starch like rice or grains, or recipes that require a lot of liquid to make it turn out right. You basically wait until the unit’s pressure goes down and you can safely open the lid very carefully.

Quick Release: You’ll use the quick release for delicate cuts of meat, vegetables, seafood, chicken breasts, and steaming. If you’re using the quick release on your Instant Pot, you’ll want to place a towel over the valve and use a wooden spoon to manually turn the valve from seal to vent. The towel will help prevent you from getting steam in your face or on your hands and arms. Please follow the direction in your pressure cooker book to be safe.

I hope you try making this potato soup recipe, it’s so versatile and easy to make. It’s all about cooking from scratch, it’s a skill we need to teach our kids and grandkids. May God Bless this world, Linda 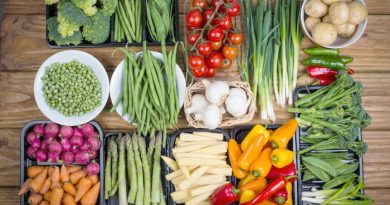 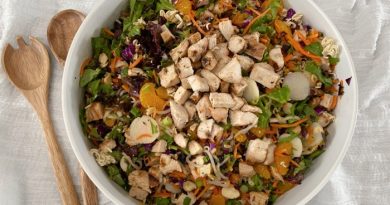