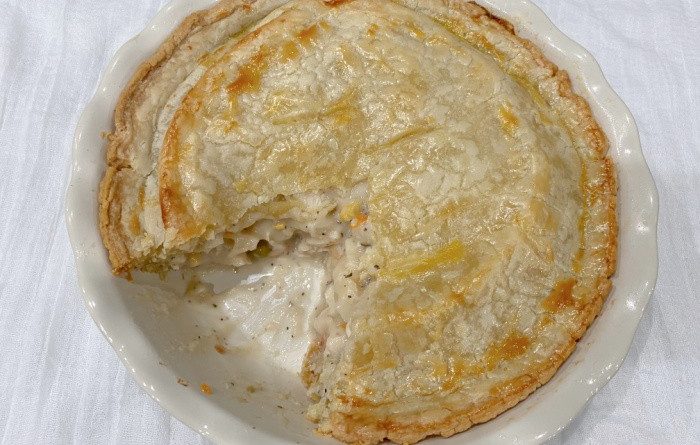 What I love about this easy chicken pot pie is that I usually always have all of the ingredients in the pantry, the freezer, or the refrigerator. I can make this dinner in one hour, literally start to finish. Of course, the pie crust must be thawed the day before.

If you make pie crust from scratch you will save a few dollars by making them yourself. The Marie Calender’s pie crusts I used can be located in the freezer section of your local grocery store.

They must be popular because where I shop they usually only have two or three in the designated freezer section. I’ve tried other pie crust brands, but they don’t pass my taste testing.

This chicken pot pie has a creamy gravy, lots of healthy vegetables, bite-size pieces of chicken, and the best pie crust ever! You can use rotisserie chicken, leftover baked chicken, and even canned chicken.

I highly recommend stocking up on canned chicken, cream of potato soup, and cans of Veg-All. Here’s the deal, I had trouble finding the Veg-All vegetables canned product. I finally found them at Krogers/Smiths Food King stores. I’m sure other stores carry them, but don’t give up if you can’t find them at first, they’re really the best for a recipe calling for a mixture of veggies.

This recipe is so easy to make and is perfect to take to a family in need, to a potluck, or just to fully enjoy a family meal. Be ready to hand out the recipe, this one is a keeper, my friends!

In case you missed my post, Easy Turkey Pot Pie

Kitchen Items You May Need:

Gather your ingredients, including the chicken that you’ve cut into bite-size pieces.

In a bowl, combine the potato soup, the can of VEG-All, the cubed chicken, the milk, the thyme, and pepper.

Scoop the mixture into the first pie crust.

Cover the mixture with the second pie crust. Crimp the edges to seal the mixture in the pie crusts. Use a knife to slit the top crust for the steam to release while cooking.

Brush the top crust with the beaten egg (optional). Bake for 40 minutes, or until golden brown. 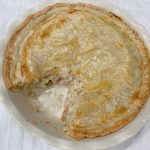 Where did pot pies come from?

Archaeological finds tell us that “pies” of various kinds date back to the Neolithic Age which was about 9500 B.C. Greeks have always loved their meats, and they would mix them with other flavored items and served in a pastry shell known as an Artocreas. As part of the Roman Empire expansion, the Romans were introduced to the pastries and they incorporated them as key banquet offerings. They expanded the meat side of the pie by offering them filled with fish, including shellfish like mussels and oysters. The Romans used a flour and oil mixture to create their “crusts.”

During the Crusade period, the pies took various shapes and ingredients all over medieval Europe. Besides new vegetable add ons, the pies also started to include new meats like venison, pork, lamb, and game animals and birds. The pilgrims brought their pie recipes with them as part of the move to the “New World” and the art of making pot pies spread throughout the US as part of the western expansion and settlement.

I still buy Marie Callendar’s frozen chicken pot pie at Costco so I have something quick and easy on those really busy days, or when guests unexpectedly show up. I understand they are different from what Marie made in her home kitchen and ultimately offered in her restaurants, but I still love them.

Are pot pies always baked in an oven?

No, you can cook them in other ways too. Some people like theirs in a skillet used over a stovetop, others in a pie iron cooked over an open flame, or I’ve seen them cooked in a Dutch oven similar to a cobbler recipe.

Is chicken the most common meat ingredient in a pot pie?

Although you’ll see or hear about other meat-based pot pies, like steak/beef, fish, ham, and bacon, the most common pot pie is made with chicken. Although not meat-based, you’ll also come across pot pies made with cheese, mushrooms, and other plant-based ingredients.

Our family loves pot pies, and most often use some variety of meat, we do make them with just the veggie components from time to time. We’ve found that either fresh or frozen vegetables seem to taste best, and we shy away from most canned veggies. That’s why I was so surprised to experience the Veg-All brand and its delicious flavor and texture. Don’t be afraid to branch out and add some onions, garlic, celery, and other flavorful veggies to change up the flavor and texture of your pot pie.

All my readers know I love any meal recipe that can be made from scratch. I harp on that all the time. The one item that has tended to baffle me over the year is how to make good pie crusts that hold their shape and taste like those in the frozen section at the store. I also have appreciated how quickly I can make meals calling for pie crusts if I have them in my freezer, ready to go. I’m always feeling a little busy, so getting them at the store works best for me.

By the way, when it comes to pie crusts, I realized many people use them for other things besides just pies. I haven’t done any research yet, but check out online some options, including:

When it comes to cooking a meal that millions have called their favorite “comfort food” for decades, jump on the bandwagon and give this chicken pot pie a whirl. It really is easy to make, has ingredients that most family members enjoy, and with the hefty amount of vegetables included, can be considered a pretty healthy meal. Don’t be afraid like me when it comes to trying your hand at making homemade pie crusts, give it a shot. Let me know how things go when making this recipe, I love hearing from you. My God bless this world. Linda 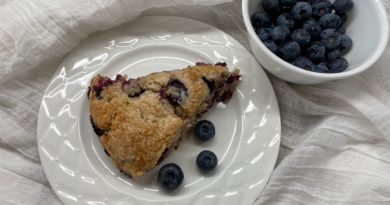 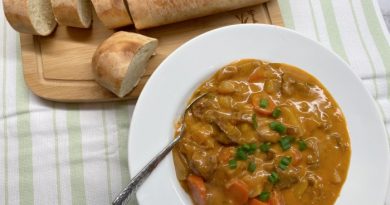 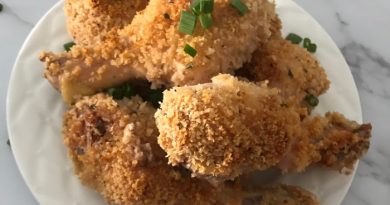