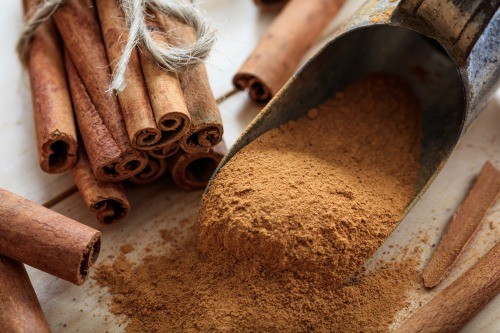 I love making cinnamon rolls, so today I’m sharing a new recipe called Cinnamon Squares! I remember teaching a class about how to make cinnamon rolls and the class members were so surprised how much cinnamon I use. I use a lot, and I mean a lot. Let’s just say I buy at least ten containers of that yummy spice from Costco for my yearly baking. I own it. Of course, I have been known to share a jar or two with friends. If you can learn to make bread with the flour your body can tolerate you can survive any disaster for a very long time. Plus, it will save you $$$ on your grocery bill.

I know a lot of people are on diets, and I should be on one for sure. I will admit I have a sweet tooth, but I’m trying to cut back on the bad carbs. I’m trying to eat healthier and exercising as well. But let’s be honest, who doesn’t love cinnamon rolls or cinnamon squares? This recipe is my roll recipe, but with a new twist, I am dying to share with you today. I need pictures, so bear with me, I have a lot of pictures today to walk you through how to make these.

I bet you can almost smell the cinnamon above, right? I hope you try making these, they are the best cinnamon squares ever! 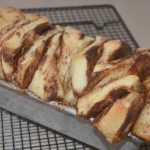 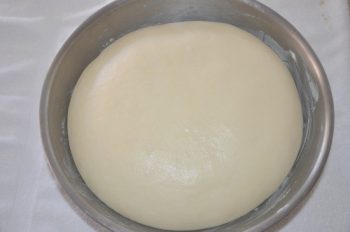 The picture above is my dough I mixed in my Bosch mixer, punched it down and placed in my buttered 18-inch stainless steel bowl. Everyone should have one of these, this has to be 25 years old and is still going strong. Stainless Steel Bowl 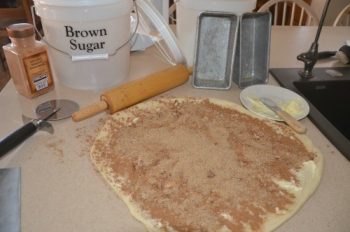 I rolled out the dough to about 12-inches by 18-inches. I slathered a lot of butter, then sprinkled a LOT of cinnamon and a few sprinkles of soft brown sugar evenly on the dough. I totally forgot to take a picture of how I “squared” the dough. You basically square the dough with a pizza cutter and then cut the dough vertically and then diagonally to make squares that are a bit smaller than your bread pans. I only use small one-pound bread pans. I have some stainless steel ones and several of the aluminum ones too. Fat Daddio Pans “Includes (2) 7.75″x3.75″x2.75″ anodized bread pans” 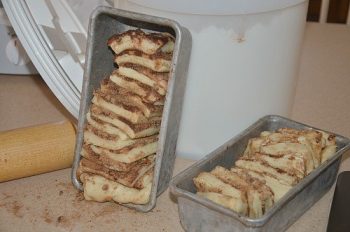 These are not perfectly shaped by any means. Here’s the deal with these, they are so moist and gooey, gooey cinnamon squares your whole family will love to make and eat, I promise. 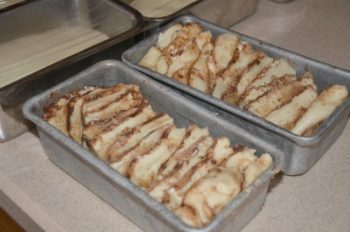 Next, you cover the cinnamon squares with greased plastic wrap and let rise. After they double in size, bake in a preheated oven at 350 degrees for 20-30 minutes. If you use larger pans they will need to be baked a little longer. 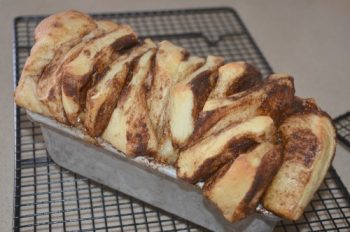 After baking, remove the cinnamon squares from the oven, immediately remove from the pans and cool on a rack. You can drizzle some cream cheese frosting if desired, or eat them warm from the oven as is. You will love these!

Thanks again for being prepared for the unexpected. These would bake great in a Sun Oven, or even in a Dutch Oven. If you have a camping combination stove/oven those would work great to bake these outside with propane. If you have a wood stove you can bake these inside your home. Please try cooking and baking outside now before we have a major disaster or grid down. Please teach your family to be self-reliant. Today. Right. Now. Not. Tomorrow.

May God bless you and your family. 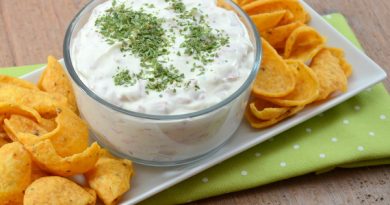 How To Make An Easy Chipped Beef Appetizer For Any Party 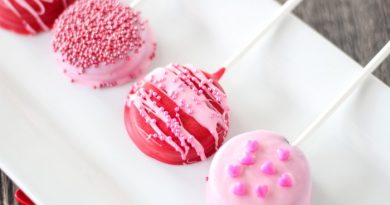 14 thoughts on “How To Make The Best Cinnamon Squares Ever”