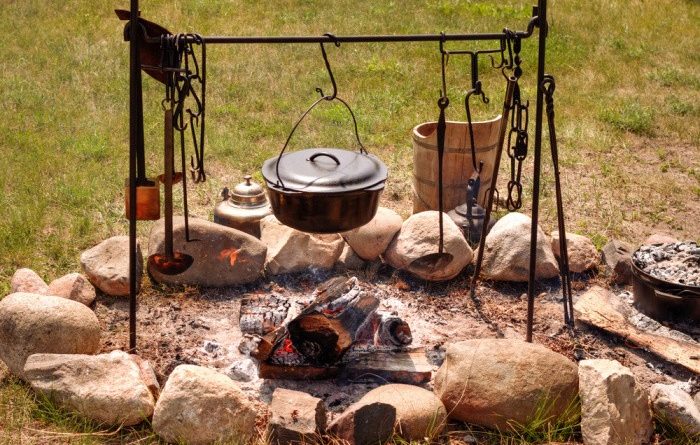 I want you to imagine a world where an open fire produces something much more than simply roasting hotdogs and marshmallows. Because a campfire for cooking was never intended to be only for the Boy Scouts and individuals who love the outdoors. It was also never meant to keep you from enjoying meals that were packed full of flavor while sleeping underneath the stars. Let’s talk about open fire cooking 101.

An open fire for cooking provides you with yet another dynamic way to socialize with others, and also to help you create wonderful smoked flavors that your stovetop could never do. But in order to do this, I’d like to share with you a few of the do’s and don’ts when using this cooking method. I’m about to broaden your horizon to open fire cooking, 101 – where anything is possible! In case you missed this post, How To Make A Dutch Oven Stand Cheap

Go with the Right Kind of Firewood

You don’t want to be that guy with a fire that has billowing smoke coming from your flame. Not only is this the sure sign of an amateur, but it will also leave your neighbors choking for air, and maybe even a few unpleasant glares from some of them. The best way to avoid this is to make sure that you are using dry, seasoned firewood instead of going with wood that’s recently been cut or is still “green.” Most campgrounds will have it available if you can’t find any on your own, but you may want to call ahead just to be safe.

Use the Right Cooking Gear

As you may already know, plastic cookware will not be able to withstand the heat of an open fire. This is why you should plan on going with metal cookware instead. Also, be sure to avoid purchasing pots and pans that have rubber-coating on their handles because they won’t hold up to the high heat in the long run. So instead, go with an aluminum pot lifter for easy transporting. If you want to play it safe while picking out appropriate cooking gear, make sure that it’s stated as being intended for outdoor use.

Having the right cookware is not only about having the proper utensils and other cooking apparatus. What you are wearing is also extremely important. Wearing a pair of flip-flops or sandals while next to a fire is only asking for trouble. You need to be wearing close-toed shoes that are able to handle the heat while you’re cooking. Getting yourself a good pair of heavy-duty gloves is something else you should think about. And lastly, consider wearing trousers and long sleeves so that an unsuspected ember doesn’t burn you.


Carefully Consider What You Plan on Cooking

Cooking over an open fire should be something that is both fun and safe. In order to keep it that way, you should avoid cooking foods that contain a bunch of fat or grease, or ones that require the use of cooking oil. All of these are notorious for causing flare-ups that can become very dangerous in a small amount of time.

However, if you still plan on cooking foods such as bacon, brats, or steaks, be sure to do so using a dutch oven rather than a frying pan. That way you have more protection and fats and greases don’t splatter as easily, which can lead to an out-of-control fire. 6-Quart Dutch Oven

Be Patient with Your Flame

You may think that just because you have a flame going it means that it’s time to start cooking, but you’d be wrong. The truth is, it takes about 30 to 45 minutes before an open fire reaches the right conditions for cooking. So if you don’t want to be the obvious rookie that starts cooking prematurely and has to backtrack because their fire has gone out, you’ll need to learn to be patient.

You will know that you have reached the right cooking point when there are glowing coals resting beneath a smaller flame. I’d also advise you to start out with smaller logs and kindling when you’re first starting out and then add your larger pieces of wood.

Don’t Place Your Food Directly Over the Flame

Unless you prefer your meals burnt to a crisp, you shouldn’t be cooking directly over the flame. What you should do is build the fire off to one side of your fire pit and gradually move the hot coals to the other side. You can cook your vegetables in aluminum wrapping above the coals. Keep in mind that if you have a camp grill it is okay to place it directly over the fire where it can be used to boil water, grill vegetables, or roast different kinds of meat.

Read More of My Articles  How To Use A Volcano Stove

Even after you have removed the food from the direct heat source, that doesn’t mean that it’s done cooking. There’s actually a carryover time where food cooks for a bit longer even when you think it’s sitting out and cooling. Some foods will continue to cook for as much as 20 minutes after it’s been removed from the heat. The best way to avoid overcooking your meal is to remove it from the open flame just before you think it’s done.

Open Fire Cooking Doesn’t Have to be Boring

Who says that cooking over an open fire means that you’re limited to only eating foods that don’t have a lot of flavors? Thanks to Country Living, they’ve provided 39 easy camping dinner recipes that ensure you will have many tasty meals for the days ahead. In case you missed this post, The Best Dutch Oven Pizza Recipe

Keep a Bucket of Water Close By

One last thing for you to remember when cooking over an open fire is to always have a bucket or two of water nearby. The last thing you need is for the flames to get out of control or for the embers to start flying off elsewhere. There’s a good chance that you’ll never have to use the bucket of water, but it’s better to be safe than sorry.  I have a hose close to the chair I’m sitting near our firepit just to be safe. This is my favorite Hose Nozzle!! You can turn the water to spray using a number of different handy settings. 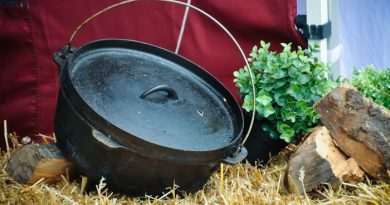 How To Use A Dutch Oven 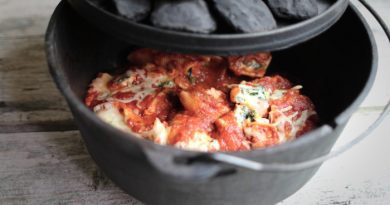 Tips For Cooking When The Power Goes Out 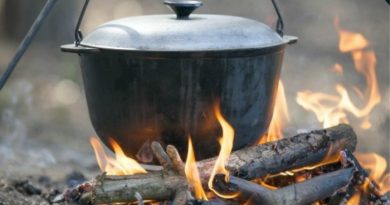 How To Be Prepared To Cook Emergency Meals